The cool, airy and sophisticated space of the Ayyam Gallery, London opened its doors last week for the launch of the Saudi artist Faisal Samra’s first solo UK exhibition on the subject of ‘Construction, Destruction and Reconstruction’ (C.D.R.) that is on show until 29 March, 2014.

Displayed against the walls are provocative looking objects mixed with digital images and performance videos that include: a broken chair, a damaged clay sculpture, a plastic bag with fragments from the same sculpture, long tubes with small colourful pencils inserted in them, two big eyes gazing and across one wall are the portrait images of a woman undergoing a struggle with cancer.

One day ahead of the exhibition, I met with Samra to probe the ‘C.D.R.’ theme. Nervous to interview the artist with three solid decades worth of creative output and acclaimed for his signature blend of the conceptual, visual and contemporary, I can confess that I went away seduced and mesmerised.

Seduced and mesmerised not just by the aesthetics of the artwork, but also by Samra’s measured way of viewing and contemplating the world around him; and, how brave and courageous he is to put these ideas and thoughts into what are truly memorable and iconic shapes, bodies and digital forms.

Nahla: How did the C.D.R. project start and develop?

Samra: The C.D.R. project went through a lot of development and changes until what you see here, where everything is showing for the very first time ever. Although I exhibited before with Edge of Arabia, Edge of Arabia Come Together and at the British Museum with ‘Word Into Art’ (curated by Venetia Porter in 2006), I consider this the first serious show for me in London.

In C.D.R, I wanted to combine different mediums in one project and I started with drawing, followed by sculpture, video and then the digital image. There are also two dimensions. One is the purely artistic one to address the essential act of creation and the other aspect is more of a sociological or geo-political dimension.

The latter is to say that the Middle East has been under a destruction and reconstruction ever since after the 1916 Sykes-Picot Agreement that divided the region when the Ottoman Empire was defeated by the Western Super Powers.

There is also a further human aspect to the work. With all of my projects, they are in the first place conceptual and visual, but on top of that I always play around with emotions and reconstructing a lot of elements that come up, like love, hate and other feelings.

Nahla: ‘Liberating the Idol’ is a display of four items that seem to follow the fate of a clay figure covered with the letter ‘I’, as well as having a small mirror attached to it so that it can look at itself. Then one sees a process of destruction with the fragments of the broken sculpture put in a plastic bag. Can you explain the reasoning behind this?

Samra: ‘Liberating the Idol’ started earlier than the other pieces in 2010 whilst in Paris before all the Middle East uprisings. Using four disciplines, I wanted to address the subject of the dictator and the process by which he is deposed. It is about the character of the tyrant and his narcissism as well as the inevitable end he will face.

No matter how big or powerful he may be at one time, in the end every dictator – that we can look at throughout history and different places – will break his own neck and be put away in a plastic bag. In a way, that is the end for all of us.

The Idol also refers to the subject of the Super Ego in Freudian terms and the dictator archetype in all of us. But unlike in Hinduism and Buddhism that argue for the Ego has to be fully erased, I think we all do need a bit of Ego to carry on but just to be aware that it isn’t inflated.

Nahla: The ‘Zeina’ piece is a series of intimate portraits of your wife during her struggle with cancer, undergoing chemotherapy and after her treatment. What was it like to have her as a subject?

Samra: Zeina’s journey with cancer was exactly at the heart of my project and she wanted to share the experience. It is about disease and how it can come to destroy us, but if we have the sense of fighting back and surviving, we can be reconstructed and transformed.

Resistance is also a vital act of life and the Zeina artwork is both personal and global or universal; because, unfortunately nowadays, breast cancer for women is like the flu. So my aim was to approach this visually and artistically and make the connection of how the physical body itself also has to go through a C.D.R.

Nahla: What about the ‘Green Eye’ and the ‘Blue Eye’?

Samra: The ‘Green Eye’ and the ‘Blue Eye’ basically refer to the split personality and the schizophrenia of the West in its look and approach to the Middle East and the double standards. The West has to have another look at the region. And, it was after the Eyes that ‘The Chair’ came.

Nahla: Chairs represent the seat or seats of power. Does ‘The Chair’ carry a political message? 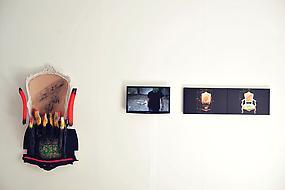 Samra: The West pre-mediated the destruction and reconstruction of the whole Middle East, with the first fragmentation happening after the 1916 Sykes-Picot Agreement that created borders and boundaries. Before that, there were none throughout the Ottoman Empire.

Again, the pre-meditated project started much before that, but the execution of the project was with 9/11 and the invasion of Iraq in 2003; when all of a sudden, we began hearing about a new Middle East. So we’re now witnessing the second fragmentation.

Nahla: Do you envisage a reconstruction to take place in the Middle East?

Samra: We don’t yet know and ironically I call it a Frankenstein. It is scary and what we see is confirming it. In Iraq, for example, the reality today is that the Kurds, Shia and Sunni are divided. So we have to build up the awareness amongst the MENA people, so that we don’t have to fall for anything given to us.

Unfortunately in Iraq, it has now been thirteen years and still they are in a mess. It is up to us and we don’t have to wait. It is up to the people of the Middle East, to create and be aware of this and to hammer the subject all the time, not just a question of mentioning it once in a while.

Nahla; Do you believe in a conspiracy theory?

Samra: No, I don’t’ believe in conspiracy and I don’t blame anybody. I am just going back to the history and studying it and saying my observations about it. But I do believe in projects and especially the projects the West have always had regarding the Middle East, which is in many ways the centre of the world, of civilisations and energies.

The Chair is saying there are premeditated ideas to destruct what is existing of power and reconstruct it again. The West however will only change when we insist for them to change. So we need to start with ourselves from the inside before the exterior will follow.

Now, we have a lot of tools to use and especially with social media. But we have to be careful not to be emotional or be open to manipulation, like what has occurred with the Arab uprisings. Yes, it was nice and romantic but we didn’t know how to carry on and become victim to manipulation by others, which they will use in some way or other.

There are a lot of people who use whatever to turn it to their benefit. Effectively, it is all a business. Everything going on is a business and it is sad to say this, but there is no emotion in the real world. Whatever makes money, gives reasons for people to do it. I do it because I can, simple as that.

Nahla:  What about the ‘Pencils’?

Samra: The ‘Pencils’ is a metaphor for public opinion and how it can be cut into pieces. It is about the systematic ways of dividing popular opinion and reconstructing it in different countries, times and places. This is a concept I am still working on and will expand into a future project about the globe and the idea of fragmentation.

Nahla: I am curious as to the numbers, measurements and the calculations that appear in a lot of your work?

Samra: The calculations relate to the structure and the mental side of things and how the mind always understands numbers. For C.D.R, I imagined the before and after destruction and knowing that with reconstruction, you always lose something from the size by either shrinking or getting bigger.

When you put numbers, you talk directly to the mind and engage it in a way not possible without the figures. If, for example, you only see the colour red, you might respond with feelings and emotions, but not with the mind. So there is the ‘internal necessity’ of an artwork in the Wassily Kandinsky sense.

Even in painting, the artist cannot finish a piece if he does not put this X or touch somewhere to make the visual balance. But if he takes it off, the whole thing will fall down, but it doesn’t have any other explanation.

Nahla: As an artist, where are you in relation to the C.D.R. cycle?

Samra: The C.D.R. cycle is continuous until the day we die. We are destroyed, but then we will be reconstructed into something else, including the reconstruction of the human body after death. It also applies to the cosmos and the Divine, that have gone through the cycle many times since the beginning of time and it goes on.

I think that to know how to live or be alive, you have to go through these three acts. And thank God for that! Imagine if something has been done or constructed and then it stays like that forever. It will only be monotone.

I have been through a lot of C.D.R. cycles and my pattern is every five years that something major happens. It is an organic process too because from within the womb of each work, there is another work born until it comes to the end.

In my work, I have also approached a number of disciplines. From my school days in Paris, I went through the classical traditional academic art subjects, from drawing, perspective to painting, history of art and civilisations and chose drawing for my graduation project.

Also, I work by themes which is more of a European concept. It doesn’t have to be that way, but I prefer it. I also say that the medium is something dictated by the theme and not the other way round. So I choose the best medium to execute a project, whatever it is.

Nahla: Lastly, what are the challenges of being a Saudi artist and fact that your work was once censored there?

Samra; I’m so involved in my work and carrying on with it that I don’t think about being censored. I just do it and if in any place, not just in Saudi, they censor my work, it just means they are not ready until the time comes. In Saudi, twenty years ago I couldn’t show my work.

Today, there is a big opening in Saudi for creativity especially among the younger generations. Due to the internet, social media and advancing technology, we have all the tools we need and it is happening fast. In fact, it is like a hurricane; but, of course, what is real and what is fake – that is a job of time that will filter it out.

More information on Faisal Samra and the Ayyam Gallery: http://www.ayyamgallery.com/artists/faisal-samra/bio

Note: This article was first published circa March 2014