19, April 2015 – A 20-metre long fishing boat capsized in the Mediterranean Sea, carrying over 900 migrants, all of whom were hoping to reach the European shores all in one piece, literally. They all took the long and arduous journey – with all of its known dangers – in chasing the illusive dream of a newer and better life; far away from the poverty, the displacement and the negative impact of the wars plaguing their home countries, from all over Africa – North and Sub-Saharan – as well as the Middle East.

Tragically, only 28 passengers on this boat were rescued alive and only 24 bodies were recovered with all of the rest lost and forever disappeared at the bottom of the sea. Buried in Malta, the coffins of the dead didn’t even bear their names. Rather, numbers were scrawled on the boxes that refer only to DNA samples taken, just in case relatives come forward in the future wanting to identify whether or not their loved ones had made it to at least a decent burial.

Ironically, this one incident got all of the national and international newspapers across the world to go manic whilst the truth is that these migrants have been dying every day and have been dying every day for many years. If anything, because of the recent high surge due to an unstable Libya – and up to a million ready to attempt the suicidal trip this Summer! – Europe can no longer sweep the issue under the carpet and must open its eyes and deal with it in a humane and compassionate way.

But this piece is neither to analyse the dreadful politics nor the harrowing economics of the situation. It is to review a wonderful book that has landed in my hands at such a timely conjecture. To this, on Nahla Ink, I have also added some of the incredible paintings of the Libyan artist Matug Aborawi with kind permission. Aborawi has himself dedicated a lot of time and effort over the years on this subject. It culminated in an exhibition titled ‘The South and The Dream’ that took place last December 2014 at Casa Arabe in Madrid, Spain. 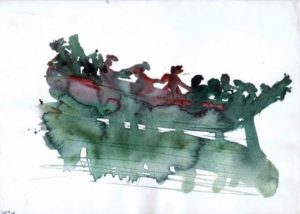 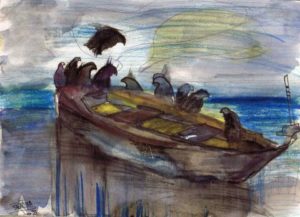 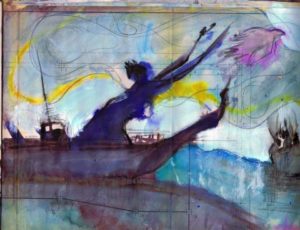 Originally written and published in Arabic in 2008, ‘African Titanics’ by Abu Bakr Khaal, is a short novel that offers a quasi-personal perspective on the Africa-Europe migration route via desert, land and sea. Recently translated into English by Charis Bredin, it is about the lives of a group of African individuals – from Eritrea, Liberia, Somalia, Ghana and Sudan – who embark on this modern day exodus and what happens to them along the way.

Narrated by Abdar, a young man from Eritrea, we follow him from the minute of desperate departure from his homeland – as he succumbs to the ‘migration-pandemic’ – and setting off towards the unknown. With barely any belongings, he has only enough cash for the journey northwards and the significant amount of $1,000 that he will need for the ultimate boat passage via the Mediterranean Sea towards the Italian island of Lampedusa.

Initially, the reader thinks this could be an exciting adventure tale with a happy ending for Abdar; until, that is, the first proper leg of the journey begins in the Sudan and towards Libya. We begin to realise just how cruel and gruelling the conditions are going to be. Quickly, he has to learn to improvise to find the right smugglers to get him out and accept that his fate will of this moment become that of an illegal nomad.

On the run from the deadly ‘Hambata’ highway robbers, Abdar and his fellow travellers must endure fifteen days of driving through the desert. With 23 people all forced into one range rover, the ill-equipped driver repeatedly gets lost with only the stars to guide him out. Thrown off course by sand storms and punished by the sun, the vermin and severe dehydration; the group is overcome with a bout of collective hysteria, as some even attempt to jump out of the car for death seems to be an easier alternative.

Surviving the desert however was just the start because they still have to reach Tripoli and live underground there in anticipation and preparation for the final stretch. Forced into and stuck in miserable hideouts, much painful evidence becomes clear of the hundreds of thousands of lives of the migrants who have gone before them. Worse, all reasonable knowledge, debates and the television and radio news indicate a total lack of positive tidings should one get onto the promised boats.

It is in Tripoli however where Abdar meets some of the characters that would impact on him dearly and powerfully. It is during this mad state of limbo that they begin to share their hopes and dreams; as well as reveal the inner and outer demons that have placed them all on such a god-forsaken path. Now as they are closer to the sea with the doomed ‘titanics’ not giving any guarantee of a safe passage, it is time to negotiate the ultimate ticket out of Africa or take the last opportunity to reconsider. But who is going to take the gamble?

Offering some insight, the narrator contemplates what goes through the mind and what happens to the body should one choose to step onto one of these vessels: “When confronted by the unhappy vessels themselves, their faces would be contorted by abject terror. No one can easily stomach the prospect of boarding a boat he knows is likely destined to founder… It is hard to describe the fear that grips you at the hour of departure. You approach the boats in darkness as they rock violently on the water.

“At that moment, you truly understand the meaning of terror. People lose control of their bowels. Damp patches spread across trousers. Many jump overboard before the boat has even left the harbour. Others are swept to sea without ever having resolved whether to stay or go.” (page 61)

Although we don’t much about Abdar’s directly, we can imagine what he is like from the little revealed. We know, for example, that he has a wicked sense of humour and is prone to acquiring nicknames. He’s been affectionately called ‘the Sniffer’, ‘the Tiger’, ‘Antar’, ‘Mr Chatterbox‘; and, most tellingly, ‘the Awacs’ – meaning ‘the Airborne Warning and Control System’ – due to his obsession with travel and weather reports that hint at a cautious nature.

Throughout the journey, also, Abdar carries with him a pocket dictionary to look up English words to understand the poetry of Shelley – that too indicates a highly romantic disposition. At one point, he even confesses to a strange penchant for fortune-telling rituals and witches as well as making reference to his sexual self so that we know he is a passionate hot-blooded male.

Without spoiling its many surprises, I’ve read this fictional account as a poetic homage to the African migrants, for both the survivors and those who simply disappear en route towards the seductive mirage. Khaal gives us the names, the human faces, the tender voices and the colourful personalities so that we don’t’ forget about them. Showing as well the courage, faith and strength required of the human spirit when faced with insurmountable odds, he poses the many questions that need a serious answering to.

Briefly I spoke to the 53 year-old Khaal on the phone because his true life slightly mirrors the tale. He left a war-torn Eritrea circa 1990 and ended up in Tripoli where he stayed for over 20 years; that he began to consider it his new home and the Libyans his people. Not foreseeing the scene after the February Revolution struck in 2011, again he was forced to flee and ended up in a refugee camp in Tunisia for two months, until he was able to move to Denmark, where he is currently based.

Fortunately with a happy ending for him, the author is now working on two new novels about Eritrea and Africa; with one having a historical perspective and the other having a romantic twist. But, I had to ask him, what is – or could be – the right solution to the migrant situation. He said it to me very simply: “We need peace!”

PS Note: This English edition of ‘African Titanics’ has been published by Darf Publishers. Established in 1980 and currently based in London with two retail shops, they focus on books about Libya, the Middle East and the Arab world. Most recently, with the emergence of literature written by Middle Eastern and North African writers, they have been translating and publishing fiction and literary works from new talents as well as from established Arab writers, to introduce them to a wider audience and shed light on work that hasn’t been seen nor read for generations.

Note: This article was first published circa Arpil