One has to wonder what kind of Art would come today from the holy city of Mecca, Saudi Arabia. Indeed, would there even be room for it in a place reserved just for Muslim pilgrims who arrive at least once in their lifetime to pray, face God and do the necessary rituals to get closer to the Divine.

It is to the inhabitants who live permanently so close and near to this place of worship that we can search for the answer because their artistic sentiments give rise to the issue of Islamic Art in general. Although Western academics would have us believe that it all ended in the 19th Century, this new exhibition at Artspace London Gallery offers a challenge.

In collaboration with Athr Gallery in Jeddah, Saudi Arabia, Made in Makkah brings the work of three living Meccan artists, who have taken the classical forms of Islamic calligraphy and sculpture and given them a modern twist. Overall, the exhibition brings a fresh insight and perspective into what can be done artistically without crossing the religious restrictions.

Nasser Al-Salem, born in 1984, is the calligraphist who has created a signature modern form that extends the Arabesque style. Drawing on the names of Allah and verses from the Quran, his work is poetically geometric with various movements created within the texts, to symbolize the transcendent perfection of God through the word.

For example, the piece entitled “Whoever obeys Allah, he will make for him a way out” is the verse transformed into a labyrinth or maze to represent the meaning of the injunction. His “Kul I” and “Kul II” are also beautiful, in black and white; and, by using mirrors, his “God shall not Die” again creates a spatial infinity. 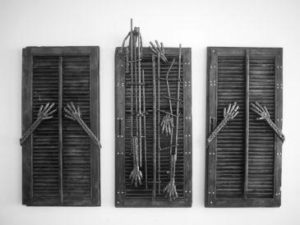 The second artist is the 32–year-old sculptress Noha Al-Sharif, who has two related pieces exhibited. Working with clay, marble aggregate and polyester resin, she has created at least 100 black female figurines for each piece that stand together in Islamic prayer or deep contemplation. They exude the sense of being together or alone in worship, as well as the peace in religious posturing.

Last but not least is the incredible and most impressive work of Saddek Wasil, who creates sculptures from dark steel, iron and discarded metal. His unusual subjects that include “Barbed”, “Windows” and “They bear their weights”, have an uncanny leaden heaviness, pain and almost torture about them.

As well-put by Artspace: “His sculptures exuberate a rejection of binding stereotypes and an iron will to defeat material subjugation for the sake of spiritual freedom. He equates metal, with strength, and his patience and ability to break down its intransigence and to manipulate it to his will, is what gives him his sense of empowerment and achievement.” 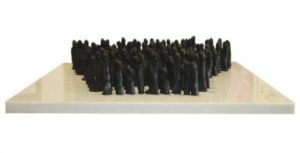 This exhibition proves that Islamic art is alive and well in the birthplace of the religion. Yes, it has changed and adapted to be new, modern and provocative, but its original spiritual dimension remains, with the process of the Art being an act of adoration and worship in itself.

Artspace was first created in Dubai in 2003, to bring the very best of new and well-established Middle Eastern artists’ works to the world stage. Now in London as well, it endeavors to provide the best selection for Western and Eastern collectors.

Made In Makkah can be viewed until 27 October 2012 at the elegant Artspace London Gallery, located very near to Knightsbridge tube station. For more information, visit:www.artspace-london.com.

Note: This article was first published circa October 2012