In Honour Of A Syrian Mother

Death is the ultimate separation, but not being able to attend your parent’s funeral makes it that far more difficult to grieve and deal with the loss. When an unfair bloody war is also taking place in the background and you are in far away exile, there is no option left for the psychological survival but to claim the personal story.

Bayda Asbridge is a 52 year-old Syrian-British artist who is currently resident in Worcester, Massachusetts (USA). When she left Syria in 1994, she vowed to never return. So when her mother died in Damascus at the end of 2012, she found herself alone and without the only four people in the world who could have helped share her pain and with whom to shed the tears.

Bayda has four sisters who are mostly estranged from war-torn Syria. Although they all grew up in Kuwait and used to travel back and forth to Syria, now two are based in the United Kingdom, one in Dubai, one in Syria and Bayda in the US.

Weaving Above Other Art Forms

A versatile artist, Asbridge could have turned to any one of the art mediums that she is highly skilled at for catharsis; she is an accomplished Asian painter, a sculptor and photographer. But instead, she turned to Saori weaving, a recent weaving technique from Japan, to help her with the emotionally charged project of grieving.

She said to Nahla Ink:  “I knew weaving would be the answer to help in our joint grief because it links us to our background and identity as Arab women from Syria. Our country has always been famous for its woven fabrics, looms, damask and other textiles and formed an important centre on the Silk Road route going as far back as the Middle Ages with its celebrated bazaars, crafts and artisans.

“Weaving also makes me feel privileged and honoured every time. It has tremendously helped me with sorting out many issues, especially in dealing with the past and the nostalgia for my homeland, people and language. But, most importantly, it has made the dead ends of my life form a full circle that tells me who I am and what my purpose is here on Earth.

“Ever since learning under the instructions of Mihoko Wakabayashi in Worcester from February 2012 onwards, something deep within me has triggered. On some days, I even feel like getting down on my knees to embrace the loom in love and tenderness.

“I think also about all the women who have ever spent hours in front of their looms making items for their loved ones but how sad that much of their efforts have been taken for granted.”

In Honour of Hayat Nasser

Asbridge’s mother, Hayat Nasser, was herself a seamstress. On every happy occasion, she would stitch nice dresses for the five girls to look good, pretty and presentable. She also sewed every other garment to save money while their father was moaning in the background about the noise of the sewing machine.

The piece in her honour of her mother is still in process, but already it is ten metres long and divided into five sections with different colours to represent each one of the five sisters. Nasser’s face has also been silk-printed in the centre of each section to show how she is still in the depths of their hearts.

The other four sisters are helping out by locating old family mementos and photos of childhood days and growing up. As Bayda has been away so long, she left behind most of her personal history and belongings in Syria and in Kuwait.

With Saori weaving, one starts with an idea, sets a warp and gets shuttles, bobbins and a variety of yarns ready for a special loom that has travelled all the way from Japan to help create a woven piece through a spiritual journey of weaving. The yarns can be wool, cotton, silk, natural fibres or acrylic

After that, you can add roving, felts, paper or even cellophane. Once the woven bit is finished, you have an extra option to decorate it with pebbles, shells, driftwood, beads, pods, dried plants and even tribal jewellery.

Haunting Demons From The Past

The experience of reflecting on the past has for Asbridge, brought back some bad memories and the demons she had originally escaped from twenty years ago, when she was 29 years old.

She said: “Although I felt loved by both my parents as a child, it all changed when I was a teenager and woke up to the fact that my father was an unhappy man. Effectively, all he wanted was a son to carry his name but instead ended up with five daughters. He was even called ‘Abou Yousef’ when he never had a son.

“My father finally alienated himself from us and I could no longer view him as a role model. Even when I got married young, his aspirations for me ceased and I felt let down because my first husband was abusive but he turned a blind eye because he found in him the missing son.”

Perhaps this is what made it easy for her to leave like a nomad to start a new life somewhere far away, even not knowing what would happen to her. But the situation was so bad that she was ready to take the risk.

Asbridge; “I ran away to survive because in the Middle East I felt suffocated just like my mother before me. Yes, she was strong but depressed due to the limits of her life and the restrictions of the society and the cultural expectations to have a son, when all she got was five girls.

“Even though scientifically it has been proven that the man’s sperm is what determines the sex of the child, my mother felt devalued and unappreciated by a tradition that only worships the male. She was a victim of an abusive marital relationship and a system that lets many other Arab Muslim women down.

“I am also angry with her because the five daughters were willing to take care of her if she decided to leave my father. We promised to work and support her but she was scared and stayed in an awful relationship that left her hollow and bitter and without much dignity, pride or hope.

“When the offer of a scholarship came to go to the United States, I didn’t hesitate and left immediately never wanting to go back; because I felt that I should have never been born there in the first place. Now, I am happy to belong to a Western world of openness, logical thinking, freedom of expression and relative gender equality that I don’t have to be punished for being a girl.”

“As for my father, I haven’t included him in the project even though I have a picture of him that my sisters sent me that I could incorporate. Yes, I do feel a bit guilty because he is alive and retired in Syria and I am working on improving my relationship with him especially in his old age. But I can’t dedicate this piece to any one else other than my mother and four sisters.” 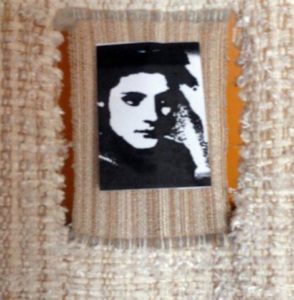 Syrian Living In The West

For the past twenty years, Asbridge has built a new life. Happily married with a 15-year-old daughter, Maya, she is immersed in lots of local projects in her adopted hometown. Although her biggest passion and priority is art, she also teaches ESL part-time and works as a medical and legal interpreter as well as giving creative classes at Worcester Art Museum.

She said: ““Even being far away, I am always Syrian and I continue to live Syria every day of my life. It is just that I now have two identities, one Oriental and one Western and I like both. In my mind they don’t clash because I choose the best of both. I also tell my daughter that she must visit Syria with or without me.

“I don’t run or hide from my identity. My first language is Arabic and I use it for my translator-work into English and I still enjoy reading it and writing with it. I am also a woman; and, yes, I struggled with that for many years and felt it as a discomfort but now I have accepted it and am proud of it.

“The conflict in Syria leaves me speechless. Social injustice started the French Revolution and the perestroika in the ex-Soviet Union. Now, it is time for the Arab world to revolt in disgust at what the people in power are doing to the working man and woman and the growing gap between different social classes.”

With the early experience of marital abuse and painfully watching her mother going through so much worse for over thirty years, has given Asbridge the impetus to help others by raising awareness of the problem and using art as therapy.

She has started a local Worcester initiative called ‘Healing Fibres’, calling on students to create art work which addresses social, political, economic, environmental and gender issues in a free-style way. Participants can use weaving, knitting, sculpture or installation, as long as it includes fibres.

As part of it, she is currently and proudly displaying and exhibiting the piece in honour of her mother. She also hopes the project succeeds and lasts well into the future.

Saori weaving originates in Japan and its philosophy is rooted in Buddhist Zen practices. It is based on the idea that weaving doesn’t have to be restrictive and mathematical but that it can be free, inclusive and accommodate different abilities. The Saori loom is user-friendly, light, portable and it also can be folded and put away when not in use.

Unlike traditional weaving where one is restricted to a specific design or pattern that looks perfect and machine-made, in Saori the emphasis is on the spirit of the weaver, her or his abilities, their personal interpretations and feelings that filter through the work.

Note: This article was first published circa February 2014