This August brings a tribute exhibition featuring the works of the late Libyan satirist and human rights activist Hasan ‘Alsatoor’ Dhaimish (1955-2016). Titled as ‘Resistance, Rebellion & Revolution’, it shows his prolific output of over 5,000 satirical cartoons spanning four decades, as well as a great selection of his paintings, at the Hoxton 253 venue in the N1 London postcode.

Passionately curated by his children, Sherif and Hanna Dhaimish, they are honouring his loving memory since his passing in 2016 at the age of 61, by sharing his life story through his various bodies of artwork, while also expanding on his personal journey as an exiled Libyan in the UK. Earlier this year also they launched a website where visitors can access the vast catalogue of his output, a biography and more.

His son, Sherif, had the following to say about the exhibition: “The hardest part of this project has been choosing what not to show. My dad was a multifaceted artist. Those familiar with his satirical work often didn’t know about the artworks he produced outside of the political arena; and many of those who knew him here in England had no idea of the reception his cartoons were getting across the globe, particularly when he started his own website. This exhibition is a celebration of his life and the works he created. He was a special man, and his story deserves to be told”.

Hasan had left Benghazi, Libya in 1975 at the age of 19. He settled in Burnley, Lancashire and soon started publishing his critical cartoons in magazines. Hasan’s satire gained popularity in the early 1980s when he began publishing cartoons for oppositional magazines such as Jihad, which was produced in London by Mahmood Suleiman Maghribi.

It wasn’t until the turn of the millennium, however, that Hasan adopted the pseudonym ‘Alsatoor’ (the Cleaver) and started gaining momentum with his satire thanks to the internet. A decade in education and a new career as an A-Level graphics teacher in Lancashire gifted him with a new range of creative skills, allowing his satire to grow with the digital age. Before beginning his own blog, he produced works for popular oppositional websites like Libya Watonona and Libya Mostakbal.

The Hoxton 253 show will have a dedicated display of his satire through the ages – from original magazines, to digital murals criticising Gaddafi and his regime, right through to his working during the 2011 Libyan Revolution and its aftermath, when Alsatoor was at his zenith. Hasan saw Alsatoor’s role as exposing corruption and voicing what he perceived to be the truth, no matter how harsh that might be. He understood and respected the power of ridicule, which is evident in the thousands of works he produced over time.

Coinciding with the satire is a series of paintings he produced outside of the political realm. During the 1990s, Hasan was on the path of artistic exploration and education. He began creating works that used afro-American culture as the subject. From an earlier age, Hasan’s musical taste came from rock n roll, motown in the 1960s, disco and funk in the 1970s, as well as reggae and dub.

However, it wasn’t until his discovery of jazz and Delta blues that the works began to influence his art. As Hasan joined college and then university as a mature student, he unshackled himself from the caricature, and began to use art as an expression from within as well as a political tool.

Hasan once stated: “During my fight against Gaddafi as Alsatoor in the 2000s, I found myself spending long periods working alone. I used to listen to jazz and classical music. The two were my companions on the long British winter nights while sitting in front of the screen. I liked jazz and blues music, it affected my artistic career.

“I loved it due to its melodies, its vitality, and the conditions in which it appeared. The suffering of black people in America at the beginning of the nineteenth century from slavery and racism was a reason behind creating this type of music. I felt a commonality in the suffering and persecution, which made me love it more, and I expressed that in a group of paintings and drawings.”

As part of the efforts to keep their father’s artwork alive and in circulation, Sherif has also published an accompanying limited edition art book that is available to pre-order at all bookstores. It is titled ‘Hasan ‘Alsatoor’ Dhaimish – A Libyan Artist in Exile’ (Pendle Press, 2021).

The exhibition launches on the 18th August with an opening night and will run for the next ten days.

For more on the exhibition: https://www.hoxton253.com/resistance-rebellion-revolution.html

This article was first published circa August 2021

For the month of June 2020, Nahla Ink is very happy to share the works of Mohammad Bin Lamin, one of Libya’s most distinguished contemporary artists. Born in 1969 in the city of Misurata, he is totally self-taught as a painter, sculptor, digital artist and photographer, as well as being a fine Arabic poet.

Highly respected in Libya and beyond its borders, Bin Lamin works prolifically and creates from varied and unexpected material, as he adapts to different environments and responds to changing social and political concerns. Influenced by Libya’s history – from the ancient to the modern and most recent – some of his pieces reference as far back as the ancient cave paintings found in the Southern mountains; whilst his colours, shapes and forms draw upon Libya’s landscape, especially the Sahara desert, the Mediterranean Sea and the urban and rural fabrics of towns and cities. 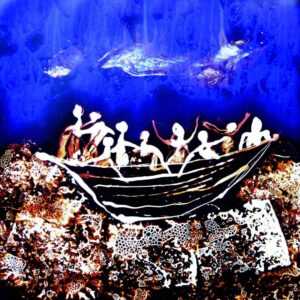 A major experience that impacted on his artistic trajectory was imprisonment at one of Gaddafi’s most notorious prisons in Tripoli during the earlier part of the February 2011 Revolution and enduring a mock execution. In his cell, he began to draw on the walls by using the metal dishes in which food was delivered to him by the wardens.

When Western journalists entered the space after liberation, they were astonished by what he left behind and tracked him down for a news report. After he had left the prison, Bin Lamin started on another project. He began to pick up and collect items left by the front lines of the anti-Gaddafi insurgency – shells, grenades, the AK-47s and other war debris – and turning them into incredible new sculptures. 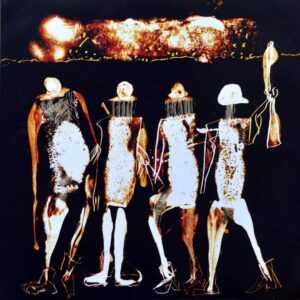 About this period, Bin Lamin has said: “When I was imprisoned in the resort of death, the Abu Salim prison, I used art to expand the narrowness of the room; that vile, narrow, menial and suffocating cell. Due to the absence of drawing tools, I used the aluminium foil that was given to us with our food as foil sheets and plates. I discovered that the foil gives the same lines as charcoal and pencil, especially if you trace it on the wall. So resorting to drawing on the wall was a haven, a refuge, an escape, even in those times when we were moved from one cell to another.

“My goal was to expand the narrow walls and stop staring at the terrifying iron door. Through my scribbling and drawing on the walls I was opening a door for contemplation, for space, for the horizon; and, at the same time, it was an expression of what was happening during those hard days. Creativity in capture is a meeting point between prison and the revelation of the soul.”

Offering further insight into his sculptural work, he has also stated: “My art reflects on the pain, the revolution, the dictatorship, the story of Libya, the so-called Arab Spring, the bad conditions that we all went through for decades; as well as the broken collective memory of being bound and ruled by force. 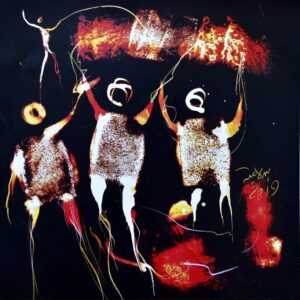 “As an artist and former political prisoner, I find myself propelled with all my obsessions and emotions and with more strength to insist on uncovering the image of the tortured being on its land; and, to search for the mature artistic expression of the shape of the ghoul (monster) that transfigured people on to its image and raped beauty. Thus I have tried to render the materials of killing – like rockets and the bullets – in the shape of the dancing lovers and to bestow on their gathering some of the jubilation and vigour for love and life, to propagate a message that we are ugliness if we choose and we are also the beauty.”

As I have followed Bin Lamin’s work for a number of years, it was difficult to decide which pieces to feature on Nahla Ink, due to the large volume of paintings, sketches and sculpture. In the end, I chose these images that spoke to me. Belonging to a series completed circa 2018-2019, Bin Lamin has written corresponding Arabic poetry. For example, the work below – titled ‘Urinating on the Corpse’- came with a poem that has been translated into English by the Libyan writer Ghazi Gheblawi. 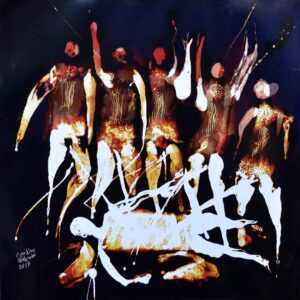 The age of death hasn’t reached an hour old
The boy hugs his land and spreads his hands
They call him in the language of time: departed
And I call him arriving every day.
People are made of what they missed
Even their sadness is typical
They cry in groups and laugh in groups..
The boy had a photograph in his pocket
He was carrying it in the trouser’s pocket
I think it is the picture of his mother or lover or someone else..
The wretched went to war with friends It seemed like going on a nice excursion
A picnic nearby But it was totally something else
The boy was caught
His hostile fellow countrymen are around him now..
Urinating on the corpse!