I first met with the 37-year-old Palestinian artist Mohammed Joha a couple of days in advance of the launch of his latest solo show at the Rich Mix venue in Shoreditch. He was with Aser El Saqqa, the curator of the exhibition, as they were taking care of the last touches to the artworks before the final presentation to a London audience.

The two men, both from Gaza, have been in collaboration for quite some time, as El Saqqa has also organised two previous shows for Joha in the United Kingdom. The last one, held in Durham in 2014, was under the theme of ‘Traces and Revelation’s, where Joha’s work was alongside that of another Gazan artist and friend Hazem Harb. So I spent an hour with the two men, as Joha talked me through the paintings and El Saqqa expressed his hopes for the exhibition.

Partly retrospective and partly current, ‘Joha – the Journey’ includes the paintings from three very important series created by the artist. From the recent and on-going ‘Lost Tracks’ Series to the ‘IN x OUT’ and the ‘Sound Barrier’ Series, some pieces are seven years old whilst others have never been seen before.

One can easily decipher the significant developments in the themes and research undertaken by Joha through the past few years. From depicting the local situation in Gaza – that will always be his bedrock inspiration – he is now also dealing with the wider issue of what is happening to the Middle East and North Africa region on the dire political, social and economic fronts.

Since the failure of the so-called Arab Spring – and he has a lot to say about this! – it has now become the Arab predicament in general that is reflected in his art and swaying his imagination. Sadly, today, we have all become collectively witness to the greater horrors that impact not just Palestine, but Egypt, Libya, Tunisia, Iraq and Syria.

Joha: “Today I can only deal with the greater theme of freedom. As an artist I just want to be able to move and fly anywhere and show my work wherever I need to without difficulties. I don’t like the bureaucracy of borders and this is the freedom I seek, to be able to fly like a dove and cross borders without being stopped or blocked.”

With his trademark surrealist expression, Joha with acrylic on canvas is forever bold, colourful and powerful with his interesting choice of symbols. Our hearts are immediately taken with the souls and the objects in his paintings as well as the hidden tales behind them. Even if viewed without knowledge of the historical background, the works hold a universal appeal and offer a narrative significance that urges one to ask questions.

For example, one would want to know in the ‘IN x Out’ pieces why there are people running off with furniture and carrying cabinets over their heads? Why also in the ‘Sound Barrier’ works, do we see upside down flowers, odd umbrellas and what does the bird mean? How come there is a shark flying in the air rather than swimming in the sea as one would expect it to? And, finally, when we view the boats with people drowning, we want answers as to how, whom and why.

Below Joha offers some insight into his personal story and creative intellect as well as hinting towards his ultimate desire and mission – to be an effective artistic ambassador for his people, the Gazans and the Palestinians. Joha’s goal is for the art to evoke strong enough feelings to encourage discussion on the international level and help translate into positive action.

I would urge everyone to visit the exhibition because more than just holding and depicting the Palestinians’ suffering, it serves as a reminder of the human strength, resilience and willpower to continue to fight for one’s rights no matter how long one has been oppressed. Joha himself is the expression of the indomitable Gazan spirit that will keep in its efforts to achieve freedom and obtain justice; and, I would trust him to be my diplomatic representative.

The ‘Sound Barrier’ series explores the experience of the sieges on Gaza. Joha, who was born, brought up and lived there until 2006, has more than first-hand experience of the matter, telling me also of his memories of being active in the various intifadas as well as having been put in an Israeli prison for nine months. Another awful recent development in 2014 saw his home quarters of Shuja’iyya being demolished and obliterated from Google Earth. These pieces are part of nine paintings and made circa 2009-2010.

Joha: “This series is about the Palestinian story. When the Israelis started to bomb us by the nightmare of the F16 and tanks, it was genocide. Every five minutes, there would be a bomb. During 2005-2006, everyday they were killing people and destroying our houses. I called this project the ‘Sound Barrier’ because I remember how the Israelis would deliberately drop bombs that failed to explode but that created a noise and a dull impact, just to make us scared.

“In these works, I imagine and depict the F16 as a surreal shark shape in the sky and not as a fish that you would normally expect to see it in the waters of a clear blue sea. Under siege, it felt like our lives were being in a zoo that was far away from other lives and other worlds and other nations. I imagine this life and how, as you see, the flowers are upside-down.

“But then there is the umbrella shape that symbolises for me the only means of protection we had, physically and psychologically. And then the pigeon, which I painted just as a bird, that is about the possible freedom. I was working on this painting late at night on 31 December, 2008 and completed it early on 1 January, 2009 when I was in Norway seeking asylum.”

The ‘Lost Tracks’ Series – The Migrants Situation Work In Progress 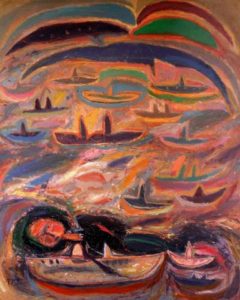 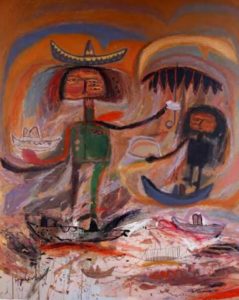 Never seen before this exhibition and forming the start of Joh’a current ‘Lost Tracks’ project, these reflect on the present day migrants’ situation and the suicidal attempts to reach Europe. We see people drowning and boats sinking but with a strong shade of orange colour as the background. Joha is aiming to complete this series by the end of 2016 with eleven oil paintings altogether and each will be sized 180x130cm.

Joha: “This is a series in progress and engaged with the concept of the so-called Arab Spring – which to me is more like the Arab Autumn – as it has only given rise to disasters. So many young Arab men are just trying to escape from a hard situation by coming to Europe via boats.

“From Syria, Libya, Egypt, Tunis and Palestine, they are all fleeing from wars and think they will find a better life, but many of them drown in the Aegean Sea or the Mediterranean. Their dreams, their lives and their hopes are over and ending. I have used the boat shape in different sizes and colours because the boats to me are as human beings that come from many locations and backgrounds.

“The bright choice of the orange however does give a visual hope. In all of my work, even when I talk about the occupation and other dramatic stories, I give a bright colour for optimism and it is also a good way of opening up a dialogue.

“As Arabs who live in Europe, we also have to be more open about the culture surrounding us and learn from this environment. I think it is important to be free in our minds first so that we can see with wide-open eyes and exchange opinions with others. My role as an artist is to be open and create the exchange of ideas and dialogue, because we are dealing with global issues, especially at this time of conflict.

“When I originally approached the subject of the ‘Jasmine and Bread Revolution’ in 2012, and showed it at the Courtyard Gallery in Dubai, when the Arab Spring had just erupted in Egypt, Libya, Tunisia and later Syria, as an artist and as a human being, I thought maybe these revolutions could free the Arabs from dictatorships. But what we have now seen is total mass destruction and we have as Arabs lost a lot. There are no flowers blooming, just lots of bleeding.”

The ‘IN x OUT’ Series – The Invasion of Home Privacy

Made circa 2013-2014, these paintings explore another Palestinian theme and consider the physical and psychological impact of the Israeli invasions on home privacy. It is about the reality that five minutes before bombing, the Palestinian would receive a phone call to tell him to leave his house, because his home will be targeted. But, then, in such a situation, what can you really take with you and where do you go.

Joha: “For the Palestinians, the house is like our identity and we feel the house like a human being – it is not just a building made of stones. But then imagine that you live somewhere all of your childhood and within a minute you cannot find it. So here I depict the houses in a particular way with the scattered furniture items with beds and cabinets flying everywhere. In #3 I have also used a collage to show in a photo image the devastation of a woman’s house just over her head.

“This IN x OUT series actually started before the Gaza war, when I listened to the news of what is also happening in the West Bank, in Jerusalem and Ramallah and Bethlehem. The Israelis did the same. They would push out the Palestinians from their houses and say that they bought the buildings one hundred years ago. So what are we left with? Our privacy is no longer.”

El Saqqa has worked with Joha for many years, going back to when Joha was an arts student in Gaza. El Saqqa: “As a curator, I want to make Joha’s voice heard on this very important platform in East London and to highlight the stories through his personal experiences and reflecting the hope and the colours in a surreal way on his own canvases.

“What we are trying to do here is to bring some of these interesting stories to the grassroots communities. I do also feel that there is much more to be done in terms of contemporary Palestinian art and to bring some of it to art lovers and art collectors the world over. This exhibition is a rare chance to see Joha’s work whilst on display.”

For more information about the artist Mohammed Joha: http://www.mohammedjoha.com/

Note: All images above are subject to copyright. Arts Canteen approval must be granted prior to reproduction. Images with kind permission: Lost Tracks #2, Lost Tracks #3, Mohammed Joha the Artist.

Note: This article was first published circa February 2016