My curiosity was piqued on a summer’s day in 2018 when I was walking around Spitalfields Thursday Antiques market in London and my eye fell upon an old faded postcard on a stall amongst the bric-a-brac. When I picked it up and looked closer, it seemed to depict an Egyptian woman dating back to the early 1900s; and, on the back, it had a stamp with a note written in English about women like her being nice to look at but smelling bad!

Born in Iraq and growing up in Nigeria and Saudi Arabia before moving to the UK in 1990, I was always one with lots of questions and looking for answers. My Egyptian father and English mother have often been the starting point for my work as an artist exploring identity. Add to that my paternal grandmother was Ottoman Turkish whilst the Egyptian family possibly originated from Tunisia, and before that Islamic Spain.

With this background, I have for years been intrigued by the inherent relationships, power structures and connections that bind my past; and, importantly, the colonial link between Egypt and Britain that had a big impact on my parents’ lives and so on my life too. The bigger narratives always have deeply personal implications.

That day I didn’t know anything about the history of what I was holding, I simply assumed that the woman shown was Egyptian. But I began researching all I could about the ‘colonial postcard’ and was soon dismayed and horrified. The featured women could potentially be from anywhere, they may even have been European models dressed up; but, mostly, they were locals often coerced or paid to be draped in strange assemblages of clothing and jewellery, the stuff of Orientalist imaginings. 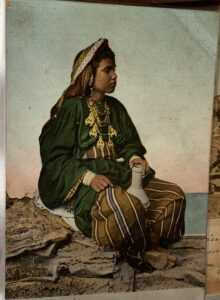 Worse was the discovery of the exploitation, subjugation and violence behind the constructed images of the women on these postcards from the Middle East and North Africa. Posted in the millions, possibly billions, images taken in the 1800s were still circulating around Europe into the1950s or even 1970s. I now have my own large collection of Egyptian colonial postcards of women that has led me to further explore the histories of the Nubians, the Ghawazee, Hungarian Egyptians, Turkish, Sudanese, Ethiopians, Armenians and Nigerians.

My search led me to learn more about what constructs the identity of these women and where they may have come from. I have now looked through hundreds of postcards from all over the MENA region as well as from Southwest Asia and accumulated a library of books relating to this troubling and fascinating historical document, which is not in fact showing any kind of truth. 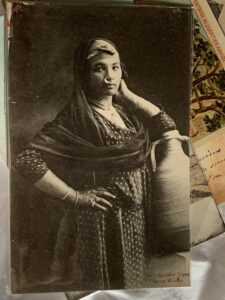 I founded ‘Making The Postcard Women’s Imaginarium’ project in August 2018 and so began Phase I of the project. I got in touch with other women artists as well as writers, poets, academics and thinkers who were all exploring identity within the context of the complex relationship between the East and West. I was keen to meet people with backgrounds that connected them to Britain and Europe and also to those places with colonial histories. I wanted it to be passionate and personal for each member.

As a group we began to look for ways to interrogate the painful histories behind the postcard women, whilst finding ways to get beyond simply seeing them as subjugated victims of a vast colonial project based on constructing racial hierarchies and imaginary Oriental Others. We needed to avoid further misrepresentation if we were to publicly share these postcards and prevent viewers from falling into the trap of experiencing them yet again as a ‘type’ of Eastern female posing as simpering, demure, over-sexualised, ‘exotic’, ‘primitive’, trapped in a quaint time warp, or malleable and ‘giving’ herself over to her captor, the colonial photographer. 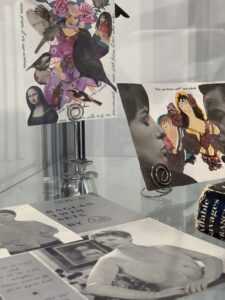 That is why we all decided not to show the postcard women directly in our work without some kind of artistic mediation or intervention. Each woman depicted on a postcard has an amazing presence that somehow reaches out beyond the attempts to portray her in a certain way and we were each responding to that in our own way.

Phase I ended with a successful exhibition at Willesden Gallery in North London in October 2019, a very multicultural place to start our journey. As curator I wanted to have the whispering and murmuring of women’s voices haunting our art works, the photographs and the display cases of research material and postcards; as well as a play of light and shadow, projections and sound overlaying the reception and experience of the installations. 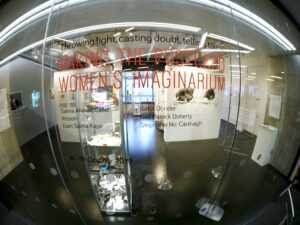 This year is Phase II of the Imaginarium project and I am delighted to collaborate with the British-Libyan architect and Arts curator Najlaa El-Ageli and the well-known British-Iranian artist Afsoon, to bring forth another exhibition.

El-Ageli brings a wealth of experience as she has worked closely with many artists from Libya and the wider MENA region and hosted exhibitions with highly respected international arts institutions. Her extensive multifaceted knowledge and rigorous interrogation of what it means to live with a colonised past and its impact on the present and future will bring a rich added perspective.

Afsoon has been with me from the start, helping to mould and shape the project and has been collecting postcards for many years. She sees everything from a unique creative angle and has helped to develop ways to open up cross-cultural dialogue and understanding. Her wit and wisdom cut through bias and prejudice. London based, Afsoon has lived and travelled the world and brings a spirit of openness into her art practice and storytelling.

Phase II is very exciting as we now have quite a number of artists and thinkers from Libya, Algeria and Tunisia, possibly Sudan and Morocco, as well as some amazing people from Phase I, who are Turkish, Irish, Spanish, Iranian and Egyptian. Once we finalise the group we will be looking for suitable venues and hosts.

The key aims are the same but we are now delving more deeply into how personal cultural stories, memories and histories of women are handed down to us. It is within this space that we often find the most transgressive, contradictory and marginalised ways of being and seeing that have been left out of mainstream narratives. The lineages of women have the greatest power to disrupt both colonial and patriarchal strongholds of knowledge and meaning making. 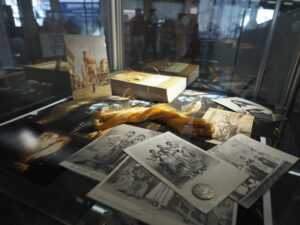 Ultimately, we hope to open dialogue and ask difficult questions. An important part of the project is the discussion blog that I facilitate online via Facebook that ranges over topics of Orientalism, Colonialism, Empire, Race, Decolonisation and Representations of Others. This can help in understanding mechanisms of how we have been shaped and how women came to be trapped in a postcard. But those women were not theories or texts. We are not theories or texts.

Going into the future, the aim is to grow in reach and presence, with each stage having different curators exploring new directions and dimensions. I like the idea of building a web of women working to radically change the narratives, weaving living connections between the postcard women and the project women, and bringing the past into the present.

As for that original postcard, I made into an artwork and soaked the paper with my Oud perfume…

Salma Ahmad Caller is a British-Egyptian artist whose practice involves creating an imagery of the narratives of body that have shaped her own body and identity across profound cultural divides. It is an investigation of the painful and contradictory mythologies surrounding the female body, processes of exoticization, and the legacy of colonialism as a cross-generational transmission of ideas, traumas, bodies and misconceptions. Her work is informed by a Masters in Art History and Theory, having studied medicine, and teaching cross-cultural perspectives at Pitt Rivers Museum in Oxford.